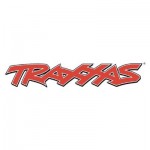 Traxxas was started in 1986, with the goal of offering fully assembled hobby level radio control that could be run right out of the box with little or no assembly, an idea that was new at the time.