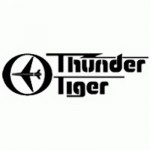 The company, originally called Thunder Tiger Science Model Shop was founded in Taichung by modeling enthusiast Aling Lai in 1974. As sourcing imported items. Lai started up Thunder Tiger Model Company in 1979. This new company began as an engine manufacturer and rapidly expanded its product line to include airplane and car kits. Thunder Tiger went on to develop the SUPERCOMBO line of almost ready-to-fly aircraft and almost ready-to-run cars. These models were at the forefront of the ARF and RTR revolution and soon replaced the kits.