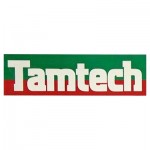 Tamtech, released in 1986, is a series of smaller radio controlled cars which can be quickly assembled and driven, powered by a 7.2v battery.

Much of the car’s lack of real success was because the popularity of the large sized counterpart meant that there were very little demand for small-scale RC cars. The Tamtech cars would later influence other RC car manufacturers including Kyosho to build miniature RC cars, such as the their own highly successful Mini-Z series and RadioShack’s popular XMODS.