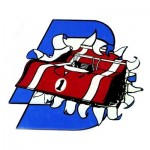 PB Racing was founded by the legendary Keith Plested in 1969 and were based in Havant, Hampshire. Their first RC car was released in 1971. Around 1982, the 1/8 scale PB Alpha was adapted into a rallycross car named the PB Mustang. A couple of years later, it had become the stunning PB Mustang Xi2. The Mustang name later appeared again as the PB Mustang X3, the next 1/8 scale I/C version, and the 1/10 scale electric powered PB Mini Mustang, an attempt to compete with the Japanese 4WD influx from Tamiya and Kyosho.