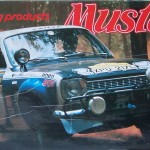 The Mustang X3 was first produced in April 1987 and was preceded by a few other versions, which included such as the Mustang, Mustang Xi2 and the Mustang Xi2 Super Competition, which date back to 1982.