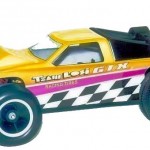 The front bulkhead, front shock tower and suspension arms are all from the LXT.
Gil Losi Jr on why they chose the LXT parts rather than use the XXT parts,
“The wider pivots (for gear clearance) and narrower arms made it much easier to get engine far enough back to get the correct wight distribution.”

Some transmission parts come from the XX, but an idler gear was added that is unique to the GTX.