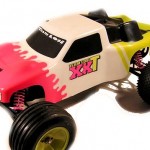 Notes
This a totally new design of truck. Sharing no major parts with the LXT.
There was 2 revisions to the XXT, XXTCR and XXT Graphite. There was also an entry level model with bushings instead of bearings.
The XXTCR had revised rear suspension setup. New arms, new mounts, new hubs and new rear shock tower.
The XXT Graphite has mostly all graphite parts and introduced the Dual Disk slipper.