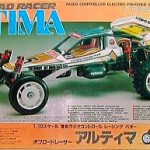 The Kyosho Ultima was released in 1986. Little did the engineers at Kyosho know, this name would be used for 20 years. In 1988 the Ultima was given a name that can only be earned, "World Champion". In the very capable hands of Joel Johnson, the Ultima won the IFMAR 2wd world championship. This name was well deserved.
Not only was the Ultima fast and nimble, but it also looked great. Kyosho hung on to the Baja buggy roll cage look for this one. It's hard to imagine that a full competition buggy had a roll cage with a driver and a metal roof.