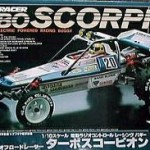 The Kyosho Turbo Scorpion is an improved version of its more common sibling the Kyosho Scorpion. Released in 1985, by both Kyosho and Cox, the turbo version had quite a few improvements over the original. The first and most obvious was the body. The turbo had a new roof that had two rectangles cut into it; the roll bar has two new flanges to mount rally lights on. The lexan body was also modified with more air duct indentions, two on the nose and two on the hood (bonnet). The rims and tires also received an update. The white, five hole rims were used and then later, the more common five star. The tires were then changed to the very difficult to find "Sand Super" spikes in the rear and ribbed in the front. These tires were also used on the Circuit 1000 Advance, the Assault and the well-known Optima. Other new bits included, 10mm shocks, new heat sink, wing stay, smaller bumper and the LeMans 360e motor.