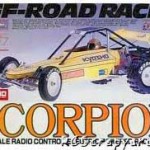 In 1983 Kyosho released the Scorpion under the Cox name as well as their own. Kyosho did this on a couple of its kits such as the Progress and Gallop. The Cox version came in a smaller than normal box because the frame was pre-assembled. The Scorpion is an electric, two wheel-drive buggy that used the same chassis as its gas counterpart, the Circuit 1000 Advance. It did very well on tracks around the world running against the the slower and heavier Tamiya SRB series (Sand Scorchers, Rough Riders).
The Scorpion over the years it was produced, came with quite a few different parts and pieces. The first of these bits was the radio gear tub. Most of these were yellow, however near the end of its run some black ones were included with the kits. Another bit that changed was the aluminum shock bodies. They started the Scorpion run silver in color, these changed to anodized red also near the end.
The Scorpion did have its share of features that were in need of improvement. The shock collars had a set screw that when tightened would push itself against the aluminum shock body, these collars would crack very easily. The rear springs and dampers were also a bit weak for the weight of this buggy and it tended to drag it’s rear end if not adjusted properly.