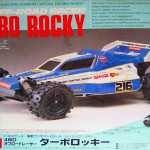 The TURBO ROCKY was quite a high spec beginners kit. Released because of the high popularity of the standard ROCKY - the Turbo incorporated quite a few "hot up" options in the kit. More bearings (though still not a full set), universal "swing" shafts, shorter wheelbase with new chassis design and some freshly designed new shock absorbers.
Most noticeable improvement over the standard Rocky was the revision of the front suspension system. The Mono shock system was now gone - in favour of a more adjustable and better handling dual shock set up. All of this was achieved without adding to the weight of the original Rocky - just what racers like to hear !
It was a sad fact though that the Turbo never really was a very popular kit - mainly because of the fact that chain drive was now considered to be far to "old" and inefficient.
The Turbo had some minor race victories - however the chain drives time had passed.