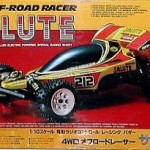 LAST in the Optima series, the Kyosho SALUTE included all the best features of the cars in the series. Ball bearings, front and rear sway bars, those beautiful gold shocks - and of course the low profile tyres and large wheels. A funky and "futuristic" body (as was the fashion at the time), adorned the aging chassis.
Unfortunately though, the Chain drive car's time was very close to an end. Inefficiency when compared to a good belt design, coupled with the aging chassis and suspension technology, lead to the end of the Optima series.
There were two Salute kits produced - the Orange as seen here - and one exactly the same - except with a Blue colour scheme. Minor differences in the body were all that separated the two Salute kits.
In fact - Kyosho offered a belt drive conversion for these cars - which many people fitted to get that last bit of life out of their favourite racer......in truth - even though heavy at the time - the original Optima's design was still competitive when fitted with the belt conversion.
There was only one more kit in the Optima chain drive series - the "celebration" gold kit - which was more designed as a tribute to the Optima, than a competition car. I am very fortunate to have one of these kits NIB.