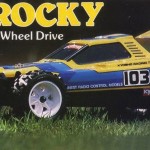 The ROCKY was Kyosho's answer for the need for an introductory level car for the racer. Actually, the Rocky incorporated a first for Kyosho.
The car had a mid mounted motor for better weight distribution. This feature answered some of the critics comments that the Optima tended to drag it's "backside" around the track, unless it was perfectly set up. This coupled with the relatively light weight of the car , helped give the Rocky some rather good success with junior and senior racers alike.
The car featured 3 large volume oil filled shocks, a LE MANS 240 ST motor as standard. Like most beginner kits of the time, the Rocky only featured bearings on the main differential out drives. The only real criticism was for the front "mono shock" system that the kit had as standard.
Often compared with Tamiya's Boomerang in terms of performance, the Rocky was a successful introduction for many new racers. The cars handling was very neutral indeed - some even saying that it was a "bore" to drive - because it just did everything so neutrally.