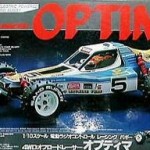 The Kyosho Optima would have to be considered as one of the early benchmarks for SERIOUS competition 4wd buggies. It’s superior transmission and rugged construction ensured many a race victory.
The secret of the Optima’s superior handling was the very solid chassis construction, which ensured that the suspension system was given every opportunity to work to its maximum potential. 4 wheel independent suspension with wishbones, and (for the time) the best shocks on a 4wd – the Optima was certainly a very tidy handling machine. The range of suspension adjustability was excellent: all camber and steering links were threaded, allowing for infinite fine tuning of most critical areas of the suspension.
Supplied with the classic Mabuchi 540 as standard, the Optima certainly “got up and boogied” when required.
In terms of the standard kit “goodies” – there was little to get excited about! Plastic and metal bushings were standard fitment (except for the diff out drives which were ball raced). Bearings of course being the first upgrade taken by many racers.