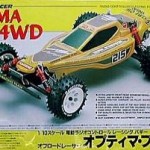 Fourth in the Optima series, the Kyosho Optima PRO was a “strange” addition to the Optima stable for the casual observer. Kyosho obviously decided that there was a need for a “middle of the road” kit in the series.
Again – the standard Optima chassis was maintained. The biggest change was the body, this time Kyosho developed an “under tray” of lexan – which helped to keep dirt and debris out of the main chassis. The larger wheels and low profile tyres were retained from the Turbo.
This is where it gets strange – the kit then is almost totally standard original Optima ! Back to the older “red” style shocks and only bearings on the main differential out drives. Worst of all – there was absolutely NO motor or even a speed control included !!
By this time though, the Optima Chassis was starting to show its age in competition circles – with the main criticism’s being the weight of the cars. The “PRO” was the second last car to use this chassis design.