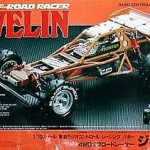 The Kyosho Javelin continued the early tradition of Kyosho, by offering a "pipe frame body" version on a popular chassis.
Like the Optima - the Javelin featured a super stiff and strong "rail" chassis, which ensured that the suspension system was given every opportunity to work to its maximum potential. 4 wheel independent suspension with wishbones, and oil filled dampers ensured a tidy handling machine. Like the Optima, the range of suspension adjustability was excellent - as all camber and steering links were threaded - allowing for infinite fine tuning of most critical areas of the suspension.
Supplied with the classic Mabuchi 540 as standard, the Javelin certainly "moved along" when you opened the throttle.
Like the Optima, factory options included in the kit were few and far between ! Plastic and metal bushings were standard fitment (except for the diff outdrives). Bearings of course, were the first upgrade taken by many racers.
Some minor changes to the shock towers of the Javelin were pretty much the only "running" changes made from the Optima kit.