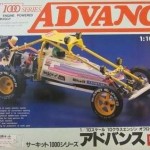 The Kyosho Circuit 1000 Advance was the first of the 1000 series. Seen on the market around 1983 this nitro buggy had an Enya .09 engine. The Advance would be the second buggy with this chassis design but not the last, it would be used in a number of later kits for the next few years. The Assault, Turbo Scorpion, Beetle, and the Tomahawk to name a few.
The roll cage and all metal design of this buggy made it very difficult to beat up. Like most of the roll cage style designs the first thing to go were the four rally lights. Also this buggy was quite loud by today’s standards. The small muffler didn’t do quite the job the larger ones do now; this made running around the neighborhood quite an attention getter.
This nitro buggy had a very unique design for getting the engine started. Marketed toward the nitro newbie, the engine had no need for an electric starter motor. Instead there was a plastic gear on the drive shaft that accepted a yellow ripcord that was about 12" long. The gear would slip on the shaft when the zip strip was inserted then would grab the shaft on the pull. The one-way action of this gear was not designed very well and would soon strip the inside barbs on this plastic gear and with no other way to turn the motor over the gear needed to be replaced. Kyosho quickly came out with an aluminum gear as an upgrade.
Another "feature this buggy touted was a bumper that accepted a "D size alkaline battery to heat the glow plug when starting. This never worked… EVER. The fix for this was to simply buy a regular hobby battery and some alligator clips.