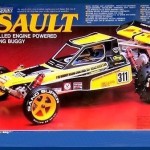 The Kyosho Assault is a nitro buggy that was based on the Circuit 1000 Advance chassis design. The Assault had a few things that the Advance did not. The first and most recognized was the lexan body set. The body style is an enclosed buggy with a rear wing. Not all the changes to this buggy were cosmetic.
One of the biggest problems with the original design was the engine starting method. A gear was used with a ripcord to turn over the motor if this malfunctioned there was no other way to turn the motor over. Kyosho added a new engine to slove this problem. The OS .12 CZ1 engine had a receiver spindle for an electric starter fitted on rear. You could also use a string if you were good. This made starting the motor much easier. For some reason they left the "D size battery glow plug starter system still in place. As described on the Advance page, this system just didn’t work.
When it came to performance, this buggy could hold it’s own. Acceleration was a bit slow but once the centrifugal clutch locked in, it would out run even the modified motor electric buggies. It did have a tendency to drag its rear end and that would cause quite a bit of under steer. Of course this wasn't much of a problem on grass where this buggy left all the electrics in the dust or clippings as it were.